When I Called a Plumber...

When you’re an expert in a field, it can be hard to step back and see things from the other side — the customer’s side. Seeing things from your customer’s point of view can prevent mistakes and identify missed opportunities. When a member of our team needed a drain cleared, we took the opportunity to provide just that. Learn from their wins and misses.

Recently, I had to call a plumber. I returned from a trip to find my shower draining so slowly that I was standing in ankle-deep water by the end. Assuming that my long hair and bar soap was the culprit, I borrowed a hand snake, pulled the drain cover and attempted to clear the blockage. After 20 minutes without any success, I did what many young homeowners do in that situation and called my dad. When his efforts resulted in the toilet backing up into the shower, we decided it was time to contact a professional. I chose to call a well-known, local plumbing company; I selected this company solely because of my father’s recommendation. 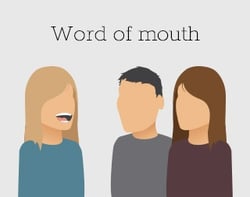 Don't underestimate the power of word-of-mouth. While reviews and search rankings are valuable tools for promotion, word-of-mouth marketing is the most trusted form of marketing. Build relationships with customers and offer incentives to encourage referrals.

My first call to the company was on a Saturday afternoon. The first thing the receptionist told me was that their office was already closed and any service that day would be emergency service. Assuming ‘emergency’ meant expensive, I chose to wait out the weekend and have the appointment on Monday. 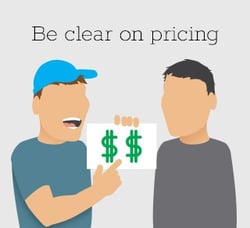 Do be clear about pricing, particularly when it comes to automatic surcharges for weekend or late night service. Customers may not expect a surcharge, and you don’t want to fight them for payment.

The receptionist explained that a scheduler would call me Monday morning sometime after 8. This meant that to receive the plumber I would have to work from home for at least part of the day. Monday rolled around, and I waited by my phone, hoping for an early appointment. When the scheduler called a few minutes after 8, I took it as a good sign that things would go quickly. The scheduler confirmed my address, the issue at hand and gave me my time slot, 10 a.m. to noon.

I was lucky that I was able to work remotely, rather than take a sick day. So, I got to work and kept my phone close. When noon rolled around and there had been no word from the plumber, I decided to call and check in. The office assured me that a plumber would be dispatched soon. Another hour and a half passed, so I called again. This time they informed me that a plumber had been dispatched and would call when he was close.

Do stay in contact with your customers while they’re waiting. If you’re running behind, be honest and let them know.

Once the plumber arrived, he introduced himself and got to work testing and tinkering. He explained that he would need to remove the toilet and put a camera down the line to find the blockage before he cleared it. 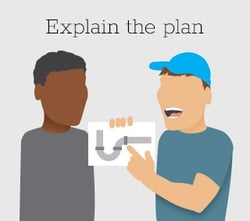 Do clearly explain what you plan to do to diagnose the problem. You don’t need to start off with a solution, but customers feel better when they know what’s going on.

The explanation complete, I left the room and heard a motor start up, which I assumed was his cable machine. After about 10 minutes of the motor going on and off and the shower starting and stopping, I heard him call “Hello?” down the hall. 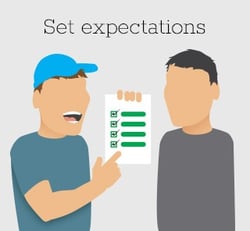 Do set your customer’s expectations. If you need the customer nearby, let them know. And remembering names and knowing how your customer prefers to be addressed ensures you can get their attention when you need it.

When I returned to the bathroom, he explained that he had cleared the clog and while doing so had found its cause as well as another issue. He brought out his camera, put it down the drain and walked me through what we saw on the screen. He explained that a portion of pipe connecting the toilet drain to the shower drain was flat, and while it wasn’t the source of this problem, it could become an issue in the future. After the two drains connected, they dropped down and made a sharp turn to connect them to the main stack. Finally, he pointed out the lip right before the sharp turn. The sharp turn combined with a lip collecting debris was the cause of that weekend’s problem, and it would likely continue to be an issue. 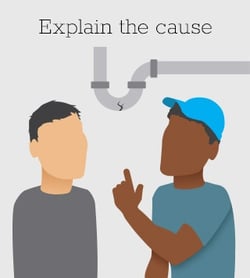 Do clearly explain the cause of the customer’s problem whenever possible. If you have a camera you can use to show them, do so. Helping the customer understand what happened helps them prevent repeat issues, whether that means changing how they use their drains or finding someone to repair it.

After walking me through both the causes of the problem and how my drains were set up while I recorded on my phone, he cleaned up the space and reinstalled the toilet. Once that was finished, he explained what services he performed and how much they cost, then let me know he would be back with an invoice. He packed up all his equipment and went to his truck. After about 20 minutes, he returned with his invoice. It was displayed on an iPad and listed each service he performed, their individual costs, the total cost and a description of his observations, how he cleared the blockage, and company contact information. 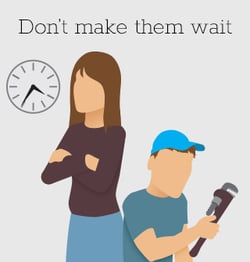 After the plumber finally left, I was able to head to work knowing my plumbing problems were solved for the time being.

Since then, I haven’t had any issues with my plumbing, but I am keeping that company in mind if I ever need a plumber again.

Do keep in touch with your customers, especially when you succeed. This shows that you care and can be a good time to ask for testimonials or reviews.